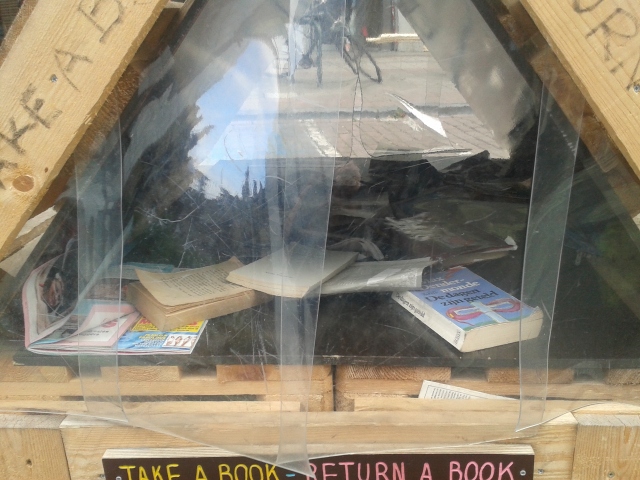 People say I am crazy, but I don’t care. They say I can’t hold it together, because I imagine things that are not real. But honestly, I am homeless and, you know, people then think you are crazy anyway. What is worse? To be out begging on the streets just like this or to be out begging and thinking you are the lord of a big country house with a garden full of tomatoes and peppers like my grandfather used to serve for Sunday salad. There is no big difference, right?

„Zoldan, come here!“ my boss yells at me. He does this little wiggle with the hand as if he was asking Buddy, my dog to come instead of me. Not that Buddy would pay much attention to anybody calling him. But at least he stays with me also in the worse moments. Yes, I have a boss and I have a job. Every morning I am brought to some street point with a car. I try to imagine it is a limousine service and that it drives me around Grand Place while almost everybody is sleeping. I don’t care the car is scruffy and full of other beggars like me. When I close my eyes I can hear faint music of violins and accordions played with devotion.

„Zoldan, come here! What is wrong with you?“ My boss approaches and looks down at me. Since this new pedestrian zone in the middle of Boulevard Anspach opened, it is more difficult to tell crazy people apart from not crazy people. A yelling leader of a beggar gang does not stand out among the frenetic bikers, smoked skaters and jobless chlochards. He looks at me with disapproval.

„Buddy does not like crossing the street, even without cars“, I say.

„Buddy is not real, you twat“, he replies. „How much did you make?“

I look up to him and blink.

„Again?“ he says grumpily. „You need to talk to the people, Zoldan. Look them straight in the eye, with sad eyes and shake the mug so they can hear the little you got, for heaven’s sake. How do you waste so much time? You know, I cannot…“

A little boy comes to me, I recognize him. He was here in the morning, with his father. „Read me one more“, he demands.

„No“, the boy insists. „I want it now!“ And he wags the old rabbit book in front of my face: Some weird story about a grown-up rabbit in a forest that cannot decide who he is.

„Leave the Monsieur“, his father intervenes. „We can come back on another day.“ And leaned to me he adds: „Can I reserve three spaces for tomorrow morning?“ He shows me a ten Euro bill. I nod. The boy waves goodbye as they leave.

Then I turn back to the urban library and start choosing the book for the next session. My boss has left without a word. I wanted to tell him that I am quitting, but he might have figured that out by himself. He is a smart guy after all. Sometimes I wish he was imaginary. I will soon find out whether he is, I think to myself, while I stroke the ears of Buddy. This is where he likes it most.

Seven Writers. Three Languages. One City.
View all posts by writingbrussels →
This entry was posted in Miguel and tagged Dogs, identity, library, partners in dime, Zinneke. Bookmark the permalink.