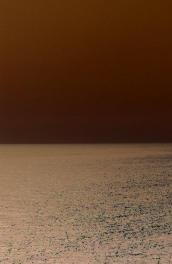 « No more… » Anne repeated. The pain shot through her body with an increasing intensity.

By her side, Oliver held her hand tightly, his eyes filling with tears. “Hang in there darling, we’re in the hospital now…you’re going to be ok”.

His voice weakened as he said these last words.

She could hear the sound of machines and voices coming from around her but already the darkness was sucking her in. Her eyes were opened but she could no longer make out where she was. She had the impression that her head was falling backwards, taking her whole body with her. A loud beeping sound came out strong over the other noises. She reached out for some air but her chest wouldn’t comply. It was as though it had collapsed, crushed by a heavy stone. Then something tasting like metal filled her mouth. Warm and thick, it made its way to the back of her throat. It tasted like blood… her own blood ….she realised in fright that she was swallowing her own blood.

Panic rose in her stomach as she tried frantically to breathe; she was drowning inside herself and couldn’t come up for air. Then the noises around her started to fade out. The taste of blood was still in her mouth but, as she tried to clear her throat, a new shock of pain disconnected her once and for all from her surroundings. When she managed to get a hold of herself again, it seemed she had been thrown out to sea and was now floating in the middle of a dark and lifeless mass; as if she had fallen into what lies beyond the night sky, into the great ocean that space forms above us. It was a starless night and, wherever she looked, the only thing she could see was darkness. She tried once more to reach out but another bolt of pain froze her into a silent scream, sending her sinking like a stone.

Anne had never felt so alone. She was slowly descending into obscurity and could no longer feel her body. This first came as a shock but was immediately followed by a feeling of relief after the torture she had just been through…”No more pain” she thought. “At last…” She was now sliding faster through the water, shedding her very own existence as she went along. Thoughts swirled out of her, evaporating like smoke as she descended like a rock.

“No more pain” she told herself repeatedly, “Whatever it takes, no more pain”. Even if it meant leaving everything behind. Apart from the freezing cold, most sensations had totally deserted her now, except maybe for one…Strangely, one had held on strong throughout her descent… The hold was like a root wrapped around her. She hadn’t noticed it at first but now that she thought about it, it had been there all along. Like a fleeting presence, it hovered near her but when she focused on it, it actually felt quite deep…and terribly warm, like when you pass a warm current of water while you are swimming in a cold sea; only this one was flowing into her rather than around her. How it contrasted with the cold and lifeless mass around her she thought. She concentrated her attention on it and noticed that the sensation it created gradually changed into a visible sparkle of light.

It came from somewhere above her, inviting her to follow it, like Ariadne’s thread. She surrendered to it, inviting the warmth further into her, letting it redefine her body parts as the golden sparks swam through her appearing limbs. It went everywhere then into her mind where it brought all her thoughts back together at once. « Oliver! » she whispered. It all fell back into place. It was Oliver’s touch, his hand holding hers strongly. He was not letting her go.

First, it came back as a faint sound. It was actually a rhythm that came from inside her. It felt as if her fists were banging on a door, pleading to be let out. She aligned her voice on it and tried to reproduce the sound. « Lub, dub, lub, dub… ». She chanted with it steadily until she felt herself coming back up to the surface.

As the darkness withered around her, the harsh lightening of the hospital room came back into focus. Very cautiously, her heart was beating again in her chest.

Seven Writers. Three Languages. One City.
View all posts by writingbrussels →
This entry was posted in Gaelle, Life is simple and tagged Karl-Ove Knausgaard. Bookmark the permalink.