The Myth of the how the Earth got hot 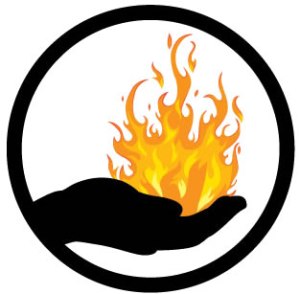 There was no fixed time for storytelling in the evenings, only one inflexible condition: everyone who was able to come needed to be present before any story could begin. The first to appear following the after-meal rest would sit quietly in a circle on their stool or chair, while the remainder joined them, as and when they could. That particular evening the group had waited patiently for BrBr to arrive. A flushed look remained on her face, which she could barely manage to hide, and discretely took her place amongst her fellows.

In terms of who would begin to tell their story first, similarly, there was little formality. This time Rgr, whose ten short years meant he was coming to the height of his enthusiasm for myths and legends, evidently could not hold himself back from wanting to share the latest account of a tale about Prometheus he had been learning that week from the Elder of History.

Story telling was an important part of the education of the youngest in the community, who were encouraged to share what they learned with their fraternum members as soon as they had internalised the imaginations they had received. Since everyone, except the very young, already knew and enjoyed the Elder’s stories, they looked forward to these special moments together, and took it upon themselves to help out the younger story tellers, if they had any difficulty remembering all the characters and steps in the plot.

Ptr, widely known as one of the warm-hearted of the story guardians and who usually guided proceedings, gestured to Rgr, who clapped his hands on top of his legs, cleared his throat and, beaming with a broad grin, began:

“Many, many years ago, Prmths, who had given the secret of fire-making to humankind, was sitting outside his cave on the top of a very high mountain. The land spread out below him was sweltering and dry. Prmths, hot and sad, gave out heavy sigh, laden with regret”.

With the characteristically grandiose beginning of this story, Smn, the youngest leaned forward on his stool, focussing on Rgr’s lips, to concentrate on what he would say next.

“All the world over, year after year, Prmths had witnessed the people, the noisiest of which lived in the city, bickering about why the earth had got so hot. Some had argued “The reason the temperature of the air is rising…”

Here Rgr spoke the part, as best he could, in his most aggressive, patronising tone.

Rgr looked to the others and Slv’s eyes responded, nodding as she intervened in a deep voice. She took the character of Prometheus:

“These” said Prmths “I will call the tribe of the smoky fire-makers”.

Rgr continued, by now his face shifting and twitching as he began to immerse himself in the story. He puffed himself up to speak in an arrogant, superior tone:

Slv spoke again, deepening her portrayal of the patient Prometheus, as he sighed again:

“Hm, no-smoke fire makers” muttered Smn, shrugging his shoulders as he mimicked Slv. Ptr put his finger to his lips and bowed his head gently towards Smn. Rgr picked the story up again, this time putting on an earnest, pious face and a tone to match:

“What we should do, is stay at home more and make less use of the machines and motors, that serve us so well.”

At this point, several of the group joined in the background with mocking laughs and jibes, as Rgr took on the snide and condescending voice of the smoky fire-makers:

“Ha ha ha, you fools, you prudes, how can we expect to have fun if we don’t use as much as we like the machines and motors, that serve us so well? And anyway, you silly kill-joys, life’s too short to worry about whether we make too much smoke or not! One day we will be dead, so why oh why should we care?”