Out of What Law 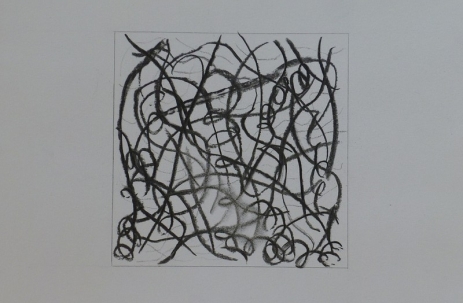 Their office block was nothing special by Brussels standards: recent refurbishment; nylon replacement carpet; LED lights fitted according to the new European norm; and a lick of pastel paint, trying hard to give the impression everything was fresh and new. Yet the corridors in the building languished as long and lifeless as before; the work inside the office cells remained a routine series of email instructions calling only for copy-pasted replies;  and the output documents continued being loaded in those thankless applications, for a hierarchy ever more obsessed with timeliness and form, rather than with content and meaning. The staff moved with the times.

Jernej was a tall, good looking guy in his late forties, who had joined the European Regulatory Authority just after enlargement and liked, by now, to think he made a good financial analyst. By the same token, he enjoyed giving the impression he was keeping fit at the local gymnasium four days a week. At least he really did neatly trim his goatee beard every morning in the bathroom of his bachelor apartment and cared for his clothes. His favourite work outfit was a tight white T-shirt under a grey V-neck Hilfiger cotton sweater, slim-fit grey Chinos, Versace jean sneakers.  Over the years, he had had a series of girlfriends but none had lasted more than a couple of months. Why that was, wasn’t clear. All his workmates knew, was that he never lost his adolescent habit of getting nervously excited about the frequent pranks and practical jokes he liked continually to play.

By contrast, Monique, secretary to the Head of Department, was a shy, serious girl, with little sense of, or interest in, what clothes best suited her plump, little figure. She had only just arrived as a temp and, despite having attended university in the city, had few friends in Brussels. She had returned willingly, after her studies, to live out of town with her ageing mother, when the 80-year old lady suffered a minor stroke. But at the same time she somehow resented the queasy feeling her mother gave her, every time the old dear chimed “Don’t you worry about staying in looking after me, you must get out more, my dear.  You don’t want to be left on the shelf.”  Monique’s boss, bungling the tips he thought he had picked up after his latest management training course on “Feedback for staff”, had inadvertently compounded her isolation in the unit when one day he commented: “Monique, you need to be more assertive, you are too timid, you know”.

That day, Jernej had just sent an excel spreadsheet to the printer. He liked any opportunity to stretch his legs. “What’s more,” he chuntered to himself “You never know who you’ll meet.”

The printer room had escaped the renovation and had remained a cramped, grey-walled box, tucked away around the corner near the toilets, where its ozone odours would cause least offence. The smutty room was still strewn with rejected and unclaimed photocopies, empty boxes and disowned files, and a sign, with a forlorn message, asking the personnel to “Please keep this room tidy”.

As Jernej turned in to the room and saw Monique, photocopying her medical bills, he felt an instant delight, as he glared at what he regularly gloated to his mates was “That cute, round bottom in that ridiculously tight pencil skirt.” He stepped briskly towards her.

The “action”, a term Jernej used on the very rare occasion that he would think back on his behaviour, took place in an instant.

To Monique, the assault occurred over Thirty. Long. Seconds.

Out of the corner of her eye Monique had seen Jernej enter the room but his approach had taken her completely by surprise. His forceful grip on her mouth cut her breath, like a gag. Inhaling through her nose, she felt a sudden, deep fear as he thrust his genitals behind her and she sensed him ejaculate into his trousers. Her cold fright coalesced into a bead of sweat that started to trickle down her back, as Jernej smugly reversed out of the room.

Monique, squeezing her eyes tightly together, frantically clutched the frame of the photocopier to avoid falling over. She stood there, shaking, her body now infused with guilt, as she began to gasp for breath and repeat the faint words “My God, what have I done? What have I done?”

The only emotion Monique could express came an hour later when she got home. She had frantically made up the excuse for her boss that she didn’t feel at all well and needed to go home early.  Now she lay in her bed in the dark, with her knees huddled up tightly to her chest. She stayed there weeping for a full hour before going to the bathroom.

She didn’t have the heart to correct her baffled mother, who had immediately supposed: “Have you found some handsome man, yet, my dear?”

Events took a sharp turn next day at work when Jernej, with no warning, failed to arrive at work, having  never read the Whatsapp messages from his closest colleagues. His brother called the office from Ljubljana around 10.30 to pass on to his boss the news, which the police had just given Jernej’s parents: he had been found dead in bed in his flat from what appeared to be natural causes, there had been no outward signs of violence. Fear of disgrace had led his brother to omit to mention that the deceased, the police had added, had evidently been drinking very heavily the night before.

Seven Writers. Three Languages. One City.
View all posts by writingbrussels →
This entry was posted in Mark, Observing Brussels, Outlaws. Bookmark the permalink.