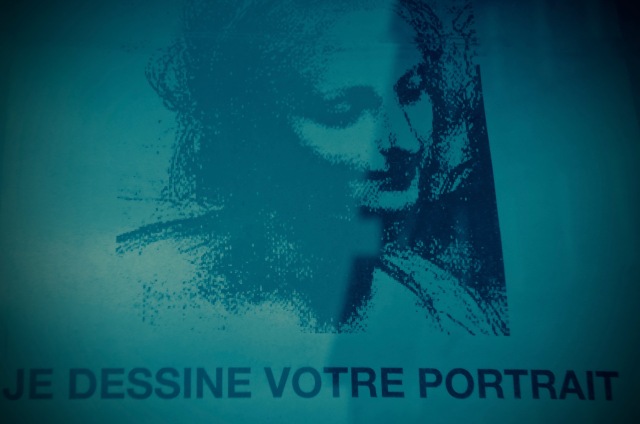 When Laura put up the ad on the urban library wall at Boulevard Anspach, she used her best drawing, or what she thought would be the best taken one: a pensative face of a woman, eyes halfclosed, the mouth about to whisper some serious truth.

I can draw your face the ad read and then it specified her name and number, followed by the tag portrait professional.

That was two months ago. It was still warm the day she waited at the Boulevard right after putting it up and longing to see someone noticing the ad immediately.

Nobody seemed to have, so far.

The streets were now full of wet leaves. The other day she even went back to the Boulevard to check whether the raindrops had washed away her drawing or some nasty skater had brushed past it and torn it on purpose, envious of her talent.

The ad seemed untouched though. She approached it, like a former friend she would not want to meet on the street. The free books that went in and out of the urban library had revolved around her drawing like riverwater washing around a rock.

Lying in her bed that night she thought: „Why has nobody called? “Was the drawing not good enough? Should I draw another one? A better one?“ She did not have a better one. She had never had a model either. She could use again a photograph in a magazine. Or maybe draw her own face.

Then the phone started ringing. Clear and cool like the autumn breeze outside. Now? She thought. Would it be someone she knew? She went to the living-room, picked up the receiver and pushed the blinking green button.

She held her breath.

The woman’s voice on the other end was full and grave, belonging to someone older, possibly.

„Yeah, but it is late“ Laura said.

„What are you doing, Laura? Would you like to draw now?“ the voice asked.

„Draw me“ the voice insisted. „Go, take a pencil and draw me.“

„Or don’t“ the voice added, suddenly a touch more distant.

„No, no. Please, stay“ Laura said quickly. She walked to her desk, the phone in her right palm. She was left-handed. The pencil started moving surprisingly easy over the sheet of paper that had been sitting on the desk, as if waiting for an opportunity in the middle of the night. She started drawing a large and mighty nose, a bit like her own, but mightier still.

„How do you imagine my face?“ the voice asked.

„Maybe older“ Laura replied. Bushy eyebrows, clear eyes. Cornered by tiny wrinkles. The nose in the centre of everything. A thin mouth, smiling.

„You can draw fast“ the voice smiled. The end line of the chin almost drew itself in one smooth stroke. It was ready.

Laura looked at the picture. „I see…myself. She looked again. „…in many years“ the voice finished Laura’s thought.

Laura sat down. Was she dreaming? No, she was not. She could hear the breathing on the other end. Her eyes rested on the face of her older self. A face washed with grief, disappointment, fear and futility. And yet it was the smile she had drawn, on this thinning mouth of hers, that made her feel safe and sound.

„Are you still there?“ the voice asked.

„That’s good.“ the voice continued. „Then it was not too late.“ And, with that, the connection died.

Later, Laura, just before she drifted into a dreamless sleep, thought that the first thing tomorrow would be to go to the urban library and take down the ad.

Seven Writers. Three Languages. One City.
View all posts by writingbrussels →
This entry was posted in Miguel and tagged drawing, ghosts, identity, memories, nobody called. Bookmark the permalink.