Just Below the Surface – Part I 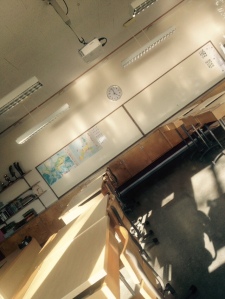 Summer was here and school was finally over! As the bell rang at the end of the last hour of class, the building vibrated with the ecstasy of newfound freedom. Excited school kids were running all over the place. Some were hugging and kissing, wishing each other great holidays. Others were hastily checking some last minute summer class information on the downstairs’ noticeboard. In a few hours, the building would be deserted for two whole months. The buzzing energy would leave place to a silence that would only be broken one last time by the cleaning team when it came in later to erase all traces of another vanished school year.

Nils was getting annoyed. He had been sitting outside the school’s entrance for 30 minutes now and his mother was late. He had told her that she’d be able to pick him up early as his teacher was not in this afternoon but she seemed to have forgotten. Since his father had left them, she’d been under a lot of stress, juggling her job and raising Nils on her own. To let off some steam, she had now taken the habit of going back each summer to Sweden to reunite with her friends and family. Nils’ parents were both Swedish so he was born in Stockholm and had only moved to Brussels at the age of 6. He thus always found it awesome to go back. Since it was now just the two of them, they’d started the tradition of leaving each year directly after his last day of school to “beat the traffic” as his mother would always put it. Nils knew that she just secretly enjoyed loosing no time in running away with him every summer. He loved it too.

But now the school bell had rung one last time and she wasn’t there. “So much for beating the traffic,” he thought. As cars left the parking lot in front of him, the place was slowly emptying out. His stomach growled. He had eaten nothing since breakfast because he’d spent his lunch break smoking with friends in the school’s basement. Now he was ravenous. He remembered he’d left an old gym bag in his locker that had still an apple in it, a gift from his gym teacher hoping to instill healthy eating habits into them. With no money in his purse, the vending machines in the main hall were not an option. An apple it would be…

His locker was situated on the second floor. As he climbed his way up absent-mindedly, his mind was still on his mother. Where was she? She was always on time usually… It’s true that she had been working later and later these last few months, so maybe she was still at it. Since she’d been promoted, 24 hours in a day no longer seemed enough for her. She now regularly brought files home, looking them over at weekends at the breakfast table…”Maybe she’ll even take some with us on holiday” he thought, sighing heavily. He checked his mobile phone again. The battery was still dead…there was little hope any change would occur in that sector. That was what you got when you didn’t take care of plugging it in before passing out in front of the TV. There was no way for him to call her; he’d just have to wait.

A loud rambling noise came from the “World room” which was just on the right hand side of the row of lockers. It was used as a kind of study place with tables prompted together in the centre and shelves covered with books along three of its walls. The last wall was covered with a huge map of the world that gave the room its name. Just between North and South America, a triangular window disrupted the blue representing the Atlantic Ocean and gave out onto the parking lot outside. Kids always joked that this was the embodiment of the Bermuda Triangle…

He walked in slowly, curious. In the room, the air was thick but still vibrant with the energy of the students who were still here only a few hours ago. A pullover had been left behind on one of the chairs and some tables were still covered with candy wrappings and notebooks. A smell of dust and old paper came from the books on the shelves but it was overwhelmed by a faint odor of perspiration, one you get when you keep nervous kids inside on a hot summer day. Nils looked out through the window. With the sky darkening outside, he realized that the loud rambling noise he’d heard moments ago was actually thunder on its way towards the school. From here he had a clear view onto the parking lot which was now completely empty. There was still no trace of his mother’s car and it was getting late. Soon the cleaning staff would arrive, locking each door behind them as they cleaned the rooms. What if something terrible had happened and she wasn’t coming? His father lived abroad with his new wife now so if his mother disappeared what would become of him? He felt a chill run up his spine just thinking of the idea. He had to contact her.

He remembered in a flash that there was a phone on the wall outside the entrance of the cafeteria. No one ever paid attention to it as this was the era of mobile phones but to Nils it was at this moment the best invention to mankind. He picked up his stuff and ran down the stair case, making sure to go outside one more time to check on his mother. The wind had picked up and a few drops were now spotting the blue stone in front of the door. He looked around but there was still no one there.

The phone was on the other side of the school so it took him a few minutes before he got to it. After one last turn, its silver shape shone like a knight in shining armor at the end of the corridor. As he finally reached out for it, he stopped dead in his tracks. One small element had slipped his mind: it was a paying phone. And he didn’t have a single coin on him.

The cafeteria door was already locked but Nils could hear voices coming from the inside. He knocked, first lightly, then gradually stronger as the voices seemed to get louder too.

Embarrassed, he cleared his throat and repeated: “I need help here.”

The voices stopped. One last laugh was heard then nothing. With his hand on the nob, he started again: “Can you please open the door? I need some change, please.”

The room had become totally quiet, as if nobody had ever been there. He knocked again, loudly: “Hello…?!? Is there anyone there?” Clearly the answer was no. Nobody was here at all…

Nils was startled. He hadn’t heard her coming. She was holding a small white card in her hand and was handing it over to him. He looked at her, then at the card, confused.

He took if from her hand and looked at it. He could see how she could have made the confusion; the picture did look a bit like him. But the guy seemed a little older, and had longer hair. It spelt out his name as “Gregory Solstic”.

She smiled and shrugged her shoulders.

Nils kept on: “Are you going into the cafeteria?”

She smiled again and grabbed the holder as she dialed her number. He was just starting to walk away when he heard her curse in a muffled voice: “Jeez Dad, why don’t you ever hear your stupid phone?!? My class has been canceled; can you come and get me? I’ll wait for you in front of the parking lot. Hope you’ll hear this.”

She hung up abruptly and turned around, finding Nils still standing there. Even though she seemed quite young you could see she had personality. For some strange reason she reminded him of someone he knew. Someone he knew very well…

“Seems like we’re in the same boat you and I” he said: “I’ll come outside with you, my mum is supposed to pick me up too. She might even be here by now.”

They walked back to the school’s entrance in silence, Nils trying to remember where he knew her from. Her face was familiar but he was sure he’d never seen her around the school before. From the corner of his eye he could see she was studying him too. He was about to speak when they reached the main entrance. The rain was beating on the door’s window vigorously. Pushing it open, he uncovered a raging thunder storm.

Seven Writers. Three Languages. One City.
View all posts by writingbrussels →
This entry was posted in Gaelle and tagged ghosts, identity, memories, partners in dime, storm. Bookmark the permalink.