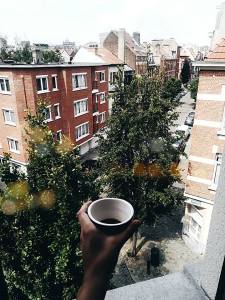 I knew, I always knew there was more to life than what meets the eye. My eye mostly met a tiny two-and half bedroom flat where nobody can avoid anybody and only on rare occasions of being home alone one can feel there is some space to breathe. On the western side of the flat the view was rather open: I saw a hill with a TV tower, a town skyline in the distance and the sky itself and there was a promise of a large world. From the eastern side of the flat I saw a long apartment building painted in brick-red. The Chinese wall, as I named the structure, blocked all the view. The sky was just a sliver of blue or grey. In the flat I spent many hours of my childhood, faintly knowing:

The bedroom I shared with my sister was on the side overlooking the red wall. Over the years I learnt to tell the weather and time by the shade of red of the opposite building – the strong sharp summer morning light made it burn, the winter sun made it deep bloody. On the other side of the flat there was a kitchen with a narrow balcony, a living room and a dining alcove, from there I could observe open spaces.

So there, on the fourth floor of a concrete building in the western suburbs of Bratislava I lived, learnt, rebelled, pretended to study, had clandestine sex, masturbated, dreamt and numbed and hoped and loved, all the confusion of human physical and psychological existence. From here I married: to my early adult sweetheart.

We, people tend to generalize our experience. I married the schoolmate I had a crash on because he was so distant and evasive, a perfect object of my desperate need to be appreciated. It developed into a kind of a friendly but dependant relationship and lasted rather long: almost twenty years and then a few years more when it was heading towards the end. No, it was not breaking-the-precious-vase kind of a split, no, it was ripping open, slicing alive, trying to patch the huge bleeding wounds, then pouring some salt and acid into them, then numbing the pain and slicing some more. And we survived. I could easily generalize the survival into a piece of advice for the young: Do not marry the person you have a crush on. But, no, it, surely, was the best I did – in order to arrive here.

I always knew I wanted to leave the suburbs, walking the long stretches of no man´s land to- and from school, marching the stairs to the tiny flat, the very stairs where I broke my still quite new and a pretty front tooth. Here I was also quite happy and contented. Some say suburbs are perfect for a writer to create – there are not too many distractions, dullness, emptiness may do it, open the space for creativity. Well, it may work for some, I am now too far from generalizing  experience.

I am a downtown person, and an ideal counter point to the downtown is a cottage on a hill where deep rich silence is occasionally broken by a shriek of an agricultural machine. Anything but suburbs.

Now, writing this, it is morning in Brussels downtown, and the first of June and swallows are busy above the roofs of Etterbeek. I hope they still find enough insects to feed their little ones, because we are now the dominating race and we have destroyed a lot. Upstairs, my lover is brushing his teeth.

I love morning hours, being awake before the others, that has never changed.

My mum may come for a visit this summer – traveling from Bratislava suburb where she still lives. In her suitcase, she will bring some nostalgia food, she would even cook and carry homemade dumplings with sheep cheese if Ryanair allowed that. And she will bring the essence of what I left long ago and what has never left me because, in fact, we never leave.

I am sitting in the narrow balcony, bare feet on the iron railing, sipping coffee with milk and smoking a cigarette, looking over summer sky towards the town and the river, looking at the TV tower that is visible from almost everywhere in Bratislava. Mother, father or sister may come here and join and sit next to me. And I will want to be alone and I will accept the company. I know I must leave, and, hey, guys I have never left you and you have never left me. All exists within, the town, the suburb, the flat, the views, not even the painful vivisection of ending the marriage could touch them.

I am a viniyoga teacher and a writer. The Slovak embassy secretary. An observer. The city of Brussels keeps me inspired, yoga keeps me focused and stories bring more stories.
View all posts by Katarina →
This entry was posted in Katarina, Saying goodbye without leaving. Bookmark the permalink.