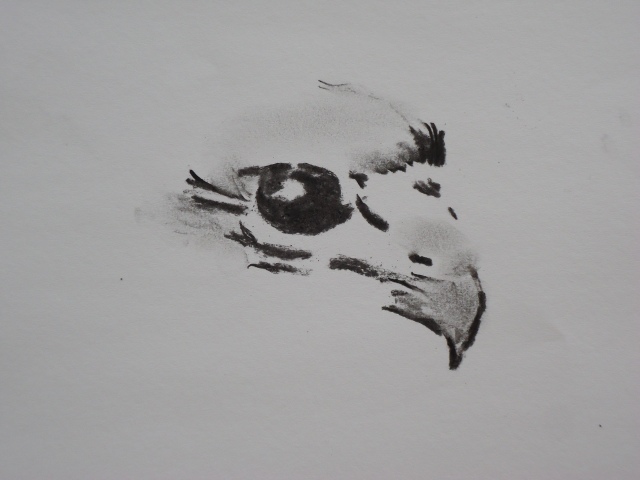 Two female hawks landed on the underground ventilation shaft, its holes mainly served for trapping women´s heels. In those situations women cursed and let passing-by gentlemen save them. They also contributed to shoe repair´s revenues, the holes. The hawks had no heels, only claws, they stayed crouched there waiting for the dusk. Dusk makes people more distracted or more concentrated, it depends. That day it came close to 9 p.m. Nobody noticed the hawks´ transformation. Two tall and thin women were descending the metro stairs. They hopped on the train loaded with people who forgot themselves in the offices or went for an after-work drink earlier, and therefore home later. Such a practice was typical for Fridays, but other days as well, especially in Brussels.

The women birds found themselves two places to sit, otherwise they would have to keep standing. It wouldn´t be a big deal if they were not so tall, their heads higher than the bar that smaller people could barely reach with their hands. As they were sitting, each one had two long thigh bones bent at the knees and long calves and feet hidden under the seats. Two matching hawk profiles – one young, one old. They had black and grey hair respectively, styled in something resembling feathers. The younger wore a hair pin.

“What for?” hissed the older one.

“It´s useless, isn´t it?” “Just like that,” the younger replied and the older nodded. They were heading to the centre. Nobody paid any special attention to them. The fact that they were not beautiful should have helped them to stay unnoticed. That, and their discreet behaviour. But there were always a few eager observers in the crowd.

“You know why we are here?” the younger one asked.

“Of course,” nodded the older one. “We have a meeting.”

“That I know as well, but with whom and why? You really can´t think I am so stupid?”

“I am seated,” snapped the younger woman bird and cut the conversation short. They continued the ride until Place de Brouckère where they got off with a big crowd. The underground station had several floors, many escapes, stairs, escalators, lifts, turns, platforms, it resembled a mice kingdom. A mouse would come handy, the younger thought. They emerged on the ground passing a sweet smelling kiosk.

“We are out,” said the older lady and scanned the surrounding with her hawky eyes: pavements, facades, lights.

“It´s next the Stock Exchange Building, the place we are supposed to meet. And it is this direction – she pointed her long bony finger towards an array: “La Bourse”. “Off we go.” They took long steps, avoiding passers-by, proceeding zigzag in an ever denser crowd. Beggars were sitting on pavements, oblivious to them, but the dogs pricked ears and howled when they noticed them.

“Almost arrived.” A wide staircase was leading to the immense building of La Bourse, but the women turned into a smaller street on the right where a golden headlight Café Cirio was gleaming into the darkness:

“There.” Despite the cold weather some people were sitting outside the café, smokers mainly. They didn´t shiver thanks to the heating device adjusted to the facade. The hawks sat inside, in a box not far from the entrance, waiting. The waiter was waiting, too – for them to choose something. The old one pecked into the menu, the younger one nodded. A minute later two bulky glasses filled with golden-brown liquid appeared on the table. They looked chilly, matching the evening. The hawks were starring in front of them.

“They will be here any minute, I can feel that,” the young one said.

“You might be right.” Indeed. They slipped into the box suddenly occupied by hawks; smaller and rounder, they had short bristle hair, silver and brown, curious faces with protruding glasses in big frames. They eyes glittered.

“So,” said the old hawk. “We have a meeting. Peck into the menu, that´s the custom here,” she advised the newcomers.

“Oh, yes, we know that,” the older owl nodded. The two young birds stayed locked in a mutual stare.

“This is just between us. To prepare the ground, or air. To identify our needs,” the older owl suggested. “The subject is urgent: equanimity of singing- and birds of prey in order to achieve sustainable development. Straight opportunities to all. Please, find all we say here confidential.” During the whole summit, the young ones – the hawk and the owl didn´t manage to concentrate on anything else than eyeing each other.

The Café Cirio closed around midnight, when the owls started to feel a real need for lunch and the hawks felt like getting some sleep before the dawn. They all disappeared into the darkness: the only witness of their transformation.