7. Brussels and a Community, as Identity 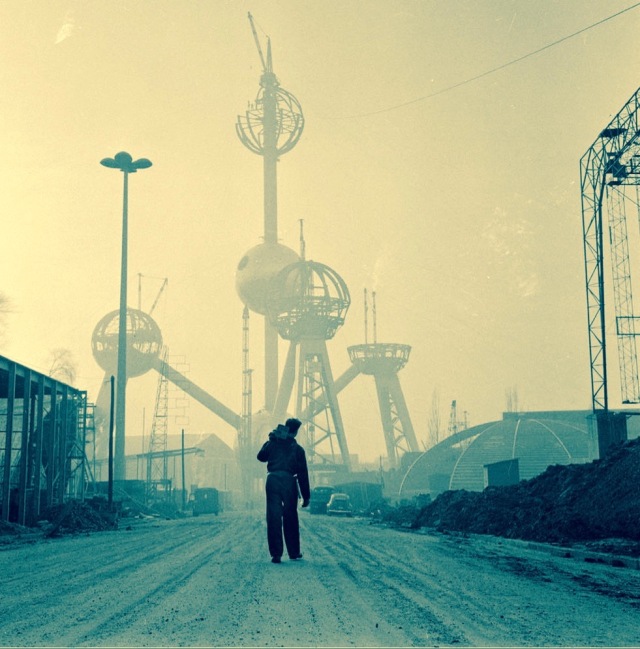 At that moment, Brbr immediately became aware that she was in the presence of another group of ten to twenty people, sat in front of her, loosely arranged, neither in rows nor in a circle around her. The men in the group were dressed in shirts and ties, some in jackets. The woman were wearing blouses, trouser suits, a little more relaxed in their dress, but, nevertheless, they were looking just as formal, and peering just as blankly, towards her.

The space they were in easily accommodated the group. The room had three plain, white walls with one side fully-windowed, through which a bright, early autumn morning was shining, illuminating a panoramic view over a low-rise city of irregular shaped buildings, dating from the late nineteenth to early twenty-first century.

High in the sky, a clear lilac wash of colour met her eyes. As her gaze drifted down, the hues passed through yellow, orange and pink, to the horizon where a glinting structure of luminous, steel spheres, connected by gleaming metallic tubes, shone in the blue purple haze of the middle distance.

“Mrtn” she had said, in one of their previous co-counselling sessions when they had discussed the significance of these vivid encounters “it’s as though I can only describe what I am seeing in such phenomena as if it was in the first person, as I”.

“To be perfectly honest, only part of me is engaged in this conversation, or whatever you’d like to call it, with these people. Quite frankly, what is the point of all this blether? Why, why do we spend so much of our time speaking these half-truths, avoiding the issue of what we know we should be doing, as if the truth is too much for us to face? This conversation pains me, it just doesn’t flow, so many look preoccupied with something else, as though we are all waiting for it to end”.

“Do I even want to register this sort of piffle? It’s quite clear the project isn’t going to get us anywhere. We’ll plan it; we’ll put out the appel d’offre; we’ll receive submissions from the same old boring consultants; we’ll choose one; we’ll execute the study; we’ll get the final reports; and then we’ll shelve them, and get back to square one, right from where we started.

Or is it just that I can’t get over that comment before coffee, from Pascale, over there in his fussy pink cravate”.

“It wasn’t so much the personal quality of the comment that bothered me, as much as its self-incriminating nature. It says far more about his thought-world than it does mine.

As if the situation wasn’t serious! Doesn’t he realise the stupidity of what he’s saying? Can this really be what the world’s come to? What makes him, like so many others, complacent with the realité they are in?”

“Can’t we all do so much better than this?”

Brbr’s eyes flashed open, as Aln brushed against her leg, and she stirred to hear Slv finishing her phrase, in passionate engagement with the word “warmth”. Scarcely a moment had passed and she had returned to the immediate present of the story circle.