6. The Arrival of the Great Chill 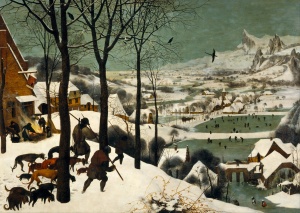 Ptr glanced around the group, his gentle frown indicating that the mockery the firemakers had made of those who pleaded for moderation in the use of machines needed no further exaggeration from the group. As the quips and giggles subsided, Rgr, quiet-voiced, picked up the story where he had left it:

“Every now and again some shy people had said “Don’t you see? The gathering warmth in the air has nothing to do with fire. The old book says there is a time for everything under the sun. And so it is on earth: there is a time of warmth and a time of cold.”

“Nobody even heard what they said”.

There was a moment’s silence amongst the group as they reflected, inwardly, how so much of humankind at this time had arrived at a point when each individual, so possessed by his or her sense of destiny, stopped listening to others around them. The fraternum members all knew what was to follow:

“And so the smoky fire-making went on and on and humankind used more and more the machines and motors, that served them so well.

Then Prmths, sitting in his mountain refuge, began to notice that, despite the continued smoky fire-making and despite the arguments of those, most of whom lived in the cities, detached from nature, that humankind was heating up the earth, the warmth in the world was gradually getting less and less.”

Once again, Ptr indulged the mild disruption created by the younger members at this point, when they began to pretend to shiver, and breathe into their hands and stamp their feet. “Oh, it’s chilly-willies”, said Smn, but Rgr took the upper hand and pressed on with the story:

With the harder winters and with the summers gradually getting colder and wetter, the crops in the fields began to yield smaller harvests, if they grew at all. So the people in the cities had to look further afield than the countryside around them for food. With the wealth they had accumulated, they tried to buy food from neighbouring countries or from overseas but the people there said they needed the food themselves”.

Rgr’s voice reached its most anxious pitch, as he proceeded to relate:

“What was worst for humankind was that people, especially those who were getting cold in the cities, got more and more desperate to use the fire inside matter, and took more and more risks to make it. Sometimes, when mistakes were made, there were big explosions and large areas of the earth became poisoned, as humankind tried harder and harder to get at the fire inside matter.”

By now the mood had become very serious and the children looked particularly glum. The older ones had been taught which the forbidden places were on the earth where nothing had lived for centuries, where no trees and plants could grow, where no birds could sing and where no animals could roam. The initial enthusiastic smile on Rgr’s face had now transformed into a grimace, as he moved ahead with the story:

“Sometimes there were big and bloody fights over the fruits of the earth that could be used to make the smoky fire. Many of the cities of the world were destroyed or ceased to be populated because the machines and motors, that had served them so well, wouldn’t work and so couldn’t find any way of getting enough food from the countryside.

A question arose in many people’s minds…”

Here Rgr looked for another of the group to take the part, and Aln leaned forward obligingly, saying:

Slv needed no reminding that the end of the story was coming, as Rgr drew in his breath and said in her best Promethean voice, “Then Prmths sighed and muttered to himself…..”:

Seven Writers. Three Languages. One City.
View all posts by writingbrussels →
This entry was posted in Mark and tagged firemakers, Great Chill, identity, vanished vowels, warmth from within. Bookmark the permalink.